From Mason to Operations Guru to Workforce Development Champion,

Coach Rob Balfanz is the VSI’s “Voice of the Installer” 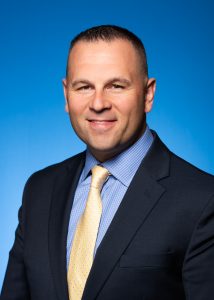 Despite all the disruptions from the COVID-19 crisis that have affected so many different industries, the Vinyl Siding Institute (VSI) has made record-breaking strides in its workforce development efforts this year.

This massive growth is due in large part to VSI’s new Director of Workforce Development, Coach Rob Balfanz. Though he has only been with VSI since April 2019, Rob attributes his success in his new role to an active professional network that he continues to steward after 22 years in the workforce.

“I built so many relationships prior to VSI that I could tap into for fostering new opportunities for mutual growth,” Coach Rob asserts. “It’s very much like the parable of the (Chinese) Bamboo tree – which I believe in strongly. I didn’t make all that traction in April during April. It started five years ago when I decided to get back into the ‘family business.’”

Most of his career has been in operations managing $100 million in business for companies like DHL before becoming a consultant for the home building industry. But make no mistake – Coach Rob has very deep roots in the trades.

“I come from a family of masons from Chicago. When I go to family events, I can’t wear a suit. Last Christmas, my dad actually had a fight with me over one of my VSI blogs because I didn’t mention tuck pointers or bricklayers in the blog! I guess it wasn’t enough that I named my son Mason – intentionally – as a tribute to my dad and my family’s legacy in this trade."

Rob jokes that he tried getting away from his dad’s business, and here he is today with a college degree working for the home building trades. As an Executive Director, Operations/Workforce Development for his former employer, Coach Rob was instrumental in getting the company to adjust its business model to add roofing to its original offerings of siding, windows and door installations. It was in this role that he recognized the enormous potential for vinyl siding installation, which is what eventually led him to VSI.

“The average siding job was worth $9,000 - $10,000, and they only take two to five days to complete, but I wasn’t sure how to get industry support to help my teams maximize our earning potential. I was invited to be a panelist on a pro-trade industry roundtable facilitated by Interrupt, and Bill Rossiter (their CEO) was the host. I didn’t know anyone there, but I had an agenda. I came to raise awareness about a problem and became part of the solution thanks to VSI.”

While discussing the challenges that installers had in growing their careers and businesses, Rob caught the attention of Kate Offringa, CEO of VSI, and Matt Dobson, Vice President of VSI. What happened next was the beginning of a beautiful relationship.

“As a result of my participation, one (manufacturer) member flew me to Mississippi to train me to be a VSI-certified installer. Soon after, Interrupt called me to do a Facebook live presentation because they liked what I had to say in the roundtable. It was during the presentation that one of the staff asked, ‘have you talked to Kate yet?’”

A week later, Rob flew to Alexandria to meet Kate for breakfast on a Sunday (he was working six days a week – Monday through Saturday – at the time). He said it was evident that the two were very much on the same page in recognizing the challenge – that the VSI had to re-engineer its training program through the lens of the average installer in the field.

“The VSI was no different than any other manufacturers’ association whose members are concentrated on codes and regulations, supply chain issues, government relations and market share. But I give VSI so much credit for recognizing the gaps and being proactive about re-building their training program.”

What convinced VSI’s leadership that Coach Rob was the right pick to head their workforce development efforts was his passion for the vinyl siding industry along with his unique combination of business management, coaching and communications expertise – especially when it comes to really connecting with those in the trade.

“There are those that preach treating the CEO and the janitor as equals, but I actually know how to do it,” he asserts. “To re-develop our training program, we needed to better understand the installers – and what their day is like. I can tell you what they’re doing year-round, and in multiple ethnicities.”

Working in the field and thinking like the installers gave Coach Rob an insider’s understanding of where VSI was with its training program, how they got there, and what they needed to do to gain more traction with their training and workforce development program.

“Rounding these guys up in June to sit in a classroom is not going to happen,” Coach Rob explains. “So I had to engage with the member manufacturers to revitalize the program.”

And the mason’s son had no problem building strong ties with the corporate management from the member base either.

“I was a ‘P & L’ fixer for DHL,” Coach Rob adds. “I was always working in operations in a management capacity, so I get what the aches, pains and desires can be like for these large companies that have so much on the line. I saw this new role as a great opportunity to show them what a huge return on investment can be when you can train more installers and recruit more seasoned installers to become trainers.”

While gaining support from the member-manufacturers, and attracting significant interest from professionals in the trade, Coach Rob – like everyone else – had another challenge to face – adjusting to the COVID-19 crisis. Approximately 99% of the VSI instructors were employed by member companies, who all had strict travel restrictions consistent with the guidelines that other industries had adopted.

But, where many saw obstacles, Coach Rob saw opportunities. “I know the word ‘pivot’ is a cliché now but I’ve been coaching players and professionals on how to pivot since day one,” says Coach Rob.  “We’re still an essential industry, and the virtual format we were developing enabled us to serve those that were still working, and those in the trades whose normal work activity was disrupted by the economic downfalls caused by the pandemic.”

And so, Coach Rob and the VSI team made a quick pivot to drive people to the online training through heavy promotion on social media (including free and discounted webinars to attract more installers to get certified). He navigated through the virtual training schedules and used his blog posts to motivate his readers to pivot and “trust the process.”

“My blog posts talk to them – the installers that are out there working 70 hours per week. I remind them that – while these are unique and tough times – they are all unique and tough people who know how to get a job done and do it well. I can sell them on the value of sticking with the training and the work, and not just trying it for 18 months like a lot of people do when they bounce around from one trade to the next.”

Being tough and trusting the process is another vital part of Coach Rob’s fabric. Previously a baseball and football player in high school, a powerlifter at Purdue University, and a semi-pro football middle linebacker with the Lafayette (IN) Lions and the Lake County (IL) Steelers, he understands the importance of being tough, passionate and self-motivated to achieve success. He instills these principles to his son’s baseball team that he coaches along with the many professionals in his network.

The results of his work so far speak for themselves. But Coach Rob will tell you that there’s a lot of unfinished business. He wants to recruit and coach more vinyl siding installers to be trainers, and he feels a sense of urgency to build a strong corps of trainers.

“I want to engage the ones who are currently working before they go away,” he says. “And now we have the industry support to help them profit from training to be mentors, taking time from their own work to train others, and to recruit more good installers to become trainers.”

As Coach Rob indicated in a recent blog post (Vinyl Siding Looks to Take Lead Role in Workforce Development), most installers were reluctant to participate in training because they felt that it was a disruption to their own work in trying to complete jobs. They were also fearful of grooming installers that could potentially replace them at a lower pay rate.

Fortunately, Coach Rob has been instrumental in communicating the members’ support in offering their in-house experts to do the training if the contractors commit to hiring more people. He also continues to stay active on social media with his emphasis on professional growth through education.

“I use social media to get in the classes, onto the job sites or wherever interested installers are willing to learn remotely. And I am looking to teach the installers and trainers of the future,” he states. “I will even talk to a fifth-grade class if given the opportunity.”

Don Browne is a writer, entrepreneur and local legislator who believes that the power of words can change the world. He provides unique writing services for clients in the construction, health care, IT and hospitality sectors. He has a passion for small business and start-ups, as well as writing about Irish history, family and corporate biographies. As a homeowner and father of four who is passionate about community development, Don looks forward to writing more about the exciting possibilities of creating traditional neighborhoods and more sustainable communities using modern materials.